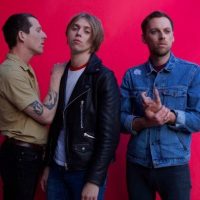 Hello Murray. What can people expect from your set today?

Murray: New songs, that’s the big thing. We’re going to play three new songs, including our new single, Feels Like Falling In Love. We’ll see how those go down, so you’ll probably see us play them quite tentatively to figure it all out. We chose to try them out here, because where better than 2000 Trees to gauge a response? So yeah, that’ll be the main thing.

You guys have become somewhat the 2000 Trees regulars over the last few years. What is your favourite memory from the festival?

Murray: The past two years we hold pretty dear to our hearts. Two years ago we played on the main stage and the crowd that showed up was just mind-boggling. We were completely blown away; we didn’t think there’d be that many people there. We thought we’d be playing to fifty people on the main stage, but it was incredible; really amazing. Then the following year we played on the Cave stage and had a great time. A couple got engaged during our set. I have so many fond memories of this festival, but that was a big one.

Are there any other bands playing at this year’s festival that you are hoping to watch perform over the course of the weekend?

Murray: Today we’re not getting to see many bands at all; we’re doing a lot of press. Rolo Tomassi are playing before us, so I really want to see them; we’re buds with them. The Menzingers are playing after us on the same stage, so I think we’re going to stay pretty close to the Cave stage. There’s so many bands playing that I wish I could’ve seen, like Beach Slang; I adore that band and they played yesterday, I think. Kevin Devine’s playing today too.

You’ve just released your new single Feels Like Falling In Love, which is your first new release since your album There Is Only You in 2014. How do you feel that the general response has been to the new single?

Honestly, it’s been pretty overwhelming. It’s the best reaction that we’ve ever had to a song. We were a little bit, not worried; but we thought some people might go against the grain and maybe say that they don’t like it because it’s too polished or poppier. Luckily we haven’t had that. I think people are just psyched that we’re no longer hinting at being a big pop band; we’ve just gone full arena pop. It’s great. It’s been amazing.

Also, does this perhaps mean that there might be a new album on the way?

Murray: Yes. I can’t say a title or a release date, but the new stuff is done and it’s coming; so I’ll leave at that to tease.

You’re doing a single launch gig at The Social in London on Monday, which has sold out already. Is there anything special planned for that gig?

Murray: Yes, we didn’t even announce it and it sold out. We’re going to play a few more new songs. It’s a tiny show, so we can’t really pull out all the stops in terms of production and what not. It’ll be more of a celebration that night, so it’s just going to be us in a tiny room with a bunch of people who dig the band. It’s going to be great and we’re just going to have a bit of a party type thing.

You’ve spent a hell of a lot of time on the road over the years on various tours. Have you ever seen anything really bizarre while you were on tour?

Murray: Where do I begin? I’ve seen some very strange things over time. I’m trying to think of the weirdest thing I’ve ever seen. I don’t know. Off the top of my head, I can’t actually think of anything; but yes, I’ve definitely seen some strange things.

There are some amazing bands playing at 2000 Trees this year that have come through the underground rock scene over the last few years. How do you feel about the current British rock scene? Is it in a good place?

Murray: Yeah, I think so. I’m not 100% clued up on it, just because I like slightly different music. I think it’s really great that bands like Catfish and the Bottlemen and The Amazons have kind of broken through. I know they’re slightly indier, but I think it’s great for guitar music in general. I think that because they’ve been accepted by the mainstream, there are a lot of people going ‘Actually, I really do like bands with guitars.’ Then people are searching for stuff or coming across UK rock bands and digging it, hence why festivals like this are thriving, which is great. From what I know, the British rock scene is in a really good place; I can list a lot of bands who are our friends and are also incredible bands. Some are bands that have played this weekend like Dinosaur Pile-up, Black Peaks and Basement. It’s in a really good place.

There are five stages at 2000 Trees. If you could choose any five artists (living or dead) to headline stages at your own festival, who would you choose and why?

What’s in the pipeline for the band for the rest of this year?

We have an album coming out at some point and there’ll be a couple more singles to come. We’ve got a UK tour coming up and also we’re going to be announcing a tonne more shows; we’re going to be touring here, there and everywhere! We’re just fully getting into it now and gearing up for the everything.