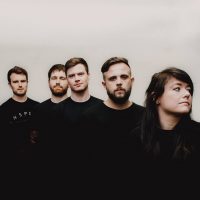 Hello CJ, Danny and Aled! How did your set go today?

CJ: It was so good! I am bruised from head to toe.

Danny: You were all over the place today!

CJ: Yeah, and of all the sets that we’ve done this weekend at Slam Dunk, that one today was by far the hardest to climb up and down.

Aled: She needed to get help to get back onto the stage!

CJ: It was so good though, and the crowd were amazing.

I think it’s safe to say that 2017 was a bit of a whirlwind year for you guys with lots of touring, playing Reading and Leeds Festival and signing to UNFD. How did it feel to have so much happen in do little time?

CJ: We haven’t really had a moment to think that this is happening, but it’s been amazing. Whirlwind is definitely the right description.

Danny: Yeah, it hasn’t really sunk in yet. We don’t even realise that we’ve released an EP last week yet. We’ve just been out and busy all the time.

Last year your single White Lies also went viral, which to this date has had over a million plays on Spotify and over 5 million plays on YouTube. Was it overwhelming to see that amount of support and also, has it set you a challenge to top that success?

CJ: I remember just sitting in my room and getting this sudden tingling sensation all over my body. It was like ‘Oh my god, what’s happening?’. It was really cool.

Danny: It was all a bit overnight wasn’t it? We went to sleep and then the next day looked at the video, and it was like ‘Wow. Ok, that’s happened!’.

CJ: We had a load of people get on board with us then, so we thought, ‘Right, let’s do this then.’

Your lyrics seem to be rather emotional and raw, particularly in your most recent single New Waves, which talks about letting go of old habits and making a fresh start in life. Is it important to bear that personal, emotional part of yourself through your music to your fans in a way that they can connect with?

CJ: Yes. When I was growing up as a teenager, it was quite a time. Music saved me. I’d put Linkin Park on, and Slipknot. I’d go home and I’d be feeling really upset, but then I’d press play and the music would help me. I’d pick up a guitar and play. I’ve always wanted to help people, but I didn’t know what would be the best way to do that. I realised that it could be done by music, and when I touch upon these subjects, I’m doing it for a reason; to tell someone that it’s ok. If I can do it, then they can do it. I think it’s very important. Music comes from somewhere really deep inside the consciousness of the world. I think it’s something very powerful and should be utilised more.

You released your EP Recovery earlier this month. How do you feel that the general reaction to the new EP has been?

CJ: All the last three Slam Dunks have been packed! They’ve all been singing and they’ve been crying with us too. You can see the emotion from them, they feel it too, and I feel it. I start crying on stage, and they start crying.

Danny: And I start crying.

CJ: And then everyone starts crying. It’s good isn’t it? You need those gigs to help let all the anxiety out. It’s amazing. We keep seeing all the people who are singing along and know all the lyrics to the EP already. It keeps pushing us to put new music out there, as they’ve already learnt those ones.

In your opinion, which is the most powerful song on the EP?

CJ: White Lies. That opened so many doors, and I was still going through a hard time around that point. It wasn’t until I chucked all that negativity into something, and used music as a positive outlet that I realised that it could change my life forever. It saved me.

Danny: I actually quite like Help Myself, because it’s about relapse. It takes a very strong person to get back from that. It’s a really powerful song, plus it’s awesome to play live.

CJ: Yes, what a guy… Hey Jack, we love you! Yeah, we would like to do an acoustic tour. That went down really well and some more fans have come to watch us since, because they saw us at the acoustic shows and they hadn’t seen us before. They were like ‘We loved you guys acoustically, you have to release an acoustic album’. Our manager’s begging us and I’m like, ‘Oh right, this is definitely happening, we have to do this’. The boys are a bit more out of their comfort zone, but it’s happening.

Danny: Yeah, I could get used to it, I guess.

You have several festival dates coming up over the summer months including this one, Download and 2000 Trees Festival, and some big dates in Europe supporting BABYMETAL. Is it exciting to be getting your music out there to bigger audiences?

CJ: It makes me feel sick thinking about it. I can see myself now walking out upon that stage and being like ‘Nope!’.

Danny: There’s not long now. About seven days and we’re going to be abroad. We haven’t got around to visiting Europe yet, so we’re really excited about that.

CJ: We don’t have time to think about it. Just chuck us out there and it happens. I’d rather that, instead of having a week to think about it. These shows will be a good experience. We want to grow and we’ll be visiting a lot of random countries, which is great. The more we expand, the more opportunities we have to get out across the border; because we really want to get out there, but until we own and establish ourselves more, we can’t do that.

The headliners for Slam Dunk are Good Charlotte and Jimmy Eat World. If you were each to select an artist, dead or alive, to choose as headliners for your own festival, who would you choose?

CJ: We saw Dave when he had his leg broken, and he still nailed it. I thought, ‘What a guy!’ and he’s an inspiration for me. So Nirvana for me and also something more recent. I’m going to say Alexisonfire, because I love them.

Aled: I’d like to get Bring Me The Horizon on there as well. Weezer too, because they are a band that you can party to.

Aled: Are you going to say Black Veil Brides?

CJ: It’d be a varied festival, but it would be a great one!

What’s in the pipeline for you guys for the rest of this year?

CJ: Lots more music and lots of shows. Basically we’re planning on working as much as possible. Onwards and upwards!