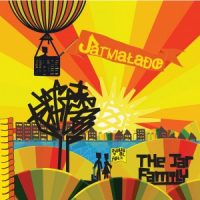 What do you think when you hear the word ‘Jarmalade’? It suggests throwing everything into the mix, giving it a stir and waiting to see how it turns out, right?

An apt name, then, for The Jar Family’s second studio album, as it appears the Hartlepool collective have thrown all the influences they could think of in and hoped it will come good.

According to their website, the collective has “forged a distinctive style of north-east blues & roots, uniquely coined as Industrial Folk”. But ‘distinctive’ and ‘unique’ don’t leap out from Jarmalade.

From the riff-led rock opener Machine, the album tries to fuse so many elements – blues, folk, classic and psychedelic rock act as a backdrop to lyrics ranging from nostalgia to political commentary – but the result is sloppy and confusing.

At times, The Jar Family sound like The Levellers without the charm of Mark Chadwick’s vocals; at other times, they sound like any number of late 90s British indie bands with a harmonica thrown over the top.

From Waiting There For You, which sounds like something Simply Red and Dodgy might have dreamed up, to Where Do You Come From, which has more than a tinge of Mumford and Sons, there are various influences at play here. Track three’s clumsy attempt at an emotional ballad, Sadie, is more sixth form talent contest than pioneering musician; it could have been done with being cut from the album all together.

But it’s by no means a write off. One of the highlights comes in the form of Paint Me a Picture, a Bob Dylan-esque acoustic number that takes on everything from poverty to media coverage of world events. A soulful vocal with a gravely edge soars over a paired down backing and understated harmonies, and for those nearly four-minutes, the album takes a positive turn. It’s quickly followed by Footsteps, a more uptempo, blues-y number that brings a distinctly different sound, but is equally as good.

Jarmalade can’t be called generic, but that’s down to lack of a solid sound rather than quality. Hopefully they’ll pick one by the third album.